The number of empty homes in Vancouver city is estimated to have crossed the 30,000 mark in 2020, according to our most recent estimate based on census data published by Statistics Canada, and housing completion data published by the Canada Mortgage and Housing Corporation. 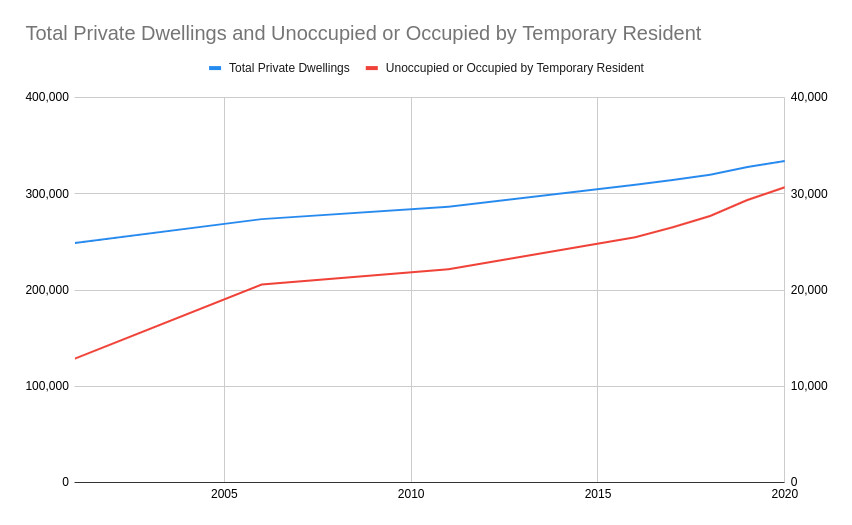 24,851 new dwellings were completed in Vancouver city since 2016, according to CMHC data on housing starts, completions and units under construction2. Assuming the empty home rate for new dwellings remained at 28.87% as with the 15 years prior, we estimate 5,187 of the dwellings added since 2016 to be empty or temporarily occupied this year.

That means an estimated 30,039 out of the 334,269 private dwellings in Vancouver are unoccupied or occupied by temporary residents.

That number should surprise nobody in Vancouver. “Never lived in” is often used as a selling point, especially for luxury condo units marketed to overseas buyers by developers like Westbank3.

Surprised to see so few lights on considering this was largely marketed as reasonably affordable, transit-oriented housing for locals.#vanre #HomesForWhom pic.twitter.com/jqUg7ZmZKO

There are some limitations to our study.

Second, since 2016, new taxes have been introduced to tackle the problem of empty homes, both by the Government of British Columbia and the City of Vancouver. Moreover, the city has instituted new bylaws to regulate short-term rentals using platforms such as Airbnb. These measures may have reduced the rate at which new homes are left empty.

Statistics Canada plans to go ahead with the 2021 census on May 11, and we could expect results a few months later. The number for private dwellings unoccupied or occupied by temporary residents will give us the best indication of whether or not measures aimed at cracking down on speculators who leave homes empty is having an impact.

You can reach Rohana Rezel at [email protected] You can also find him on Twitter, Facebook and Github.

One thought on “Vancouver empty homes crossed 30,000 mark this year”