The Land Owner Transparency Registry shows that an individual by name of Xiao Dong Liu is the beneficial owner of 65 properties.

64 of those titles are held by Carthew Registry Services, which itself had once been named as a defendant in a lawsuit alleging real estate fraud1. 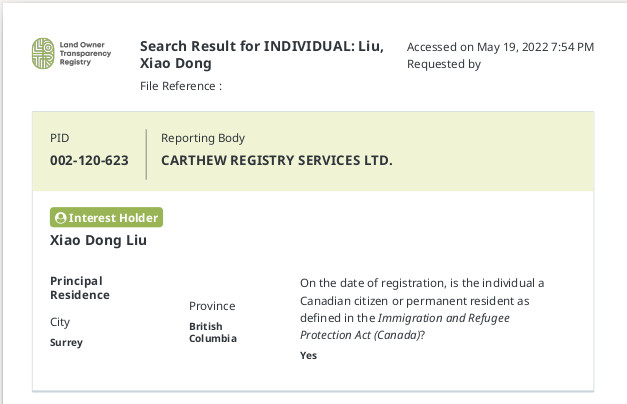 BC Supreme Court documents show that Xiao Dong Liu a.k.a. Allen Liu – who is involved in various businesses in Richmond, BC and in China – has been involved in a long running lawsuit involving the sale of a Burnaby bowling alley that the presiding judge described as a “Festival of deceitfulness”.

We were able to establish through extensive BC Corporate Registry searches that Xiao Dong Liu in the Land Owner Transparency registry.

B.C. Supreme Court Justice Andrew Mayer in the case found that Liu and his realtor Kevin Hien had convinced the owner of the bowling alley to prepare a bogus sales agreement for $10 million more than the price the parties had actually agreed on2.

“I find the evidence of Allen Liu and Kevin Hien with respect to the Alleged First Offer to purchase the Brentwood property for $38.8 million and the preparation of a Letter of Intent to be false,” Mayer wrote in his ruling. “As I will expand on below, the evidence leads me to conclude that the Alleged First Offer and Letter of Intent never existed and evidence in this respect was fabricated by Allen Liu and Kevin Hien to mask Allen Liu’s attempts to mislead Youyi China and perhaps other investors.”

The justice also ruled that Hien had also tried to carry out a “false deposit scheme” at Liu’s direction.

The false deposit scheme fell through when the vendor refused to cooperate with Liu.

“Various judgments have, with undisguised scorn, referred to repeated witness untruthfulness during trials as a ‘festival of mendacity,’ that is, a festival of deceitfulness,” Mayer wrote in his 2019 ruling. “I find that this description is appropriate in this case.”

The judge ruled the sales contract unenforceable because it was “tainted by illegality”.

BC Court of Appeal upheld the decision in 20203.

We need your help. The story cost us more than $200 in Land Owner Transparency Registry and BC Corporate Registry Service fees. Please subscribe so we can do more real estate transparency reporting.